Please be informed that Canon offices in Hong Kong and Macau, Canon Business Experience Center, Canon Image Square and Customer Service Hotlines will be closed early at 3:00 pm on 31 January (Monday), and closed from 1 to 3 February (Tuesday to Thursday).

All touchpoints will be resumed normal service hours from 4 February (Friday).

Thank you for your understanding.

We wish you a Happy Lunar New Year! 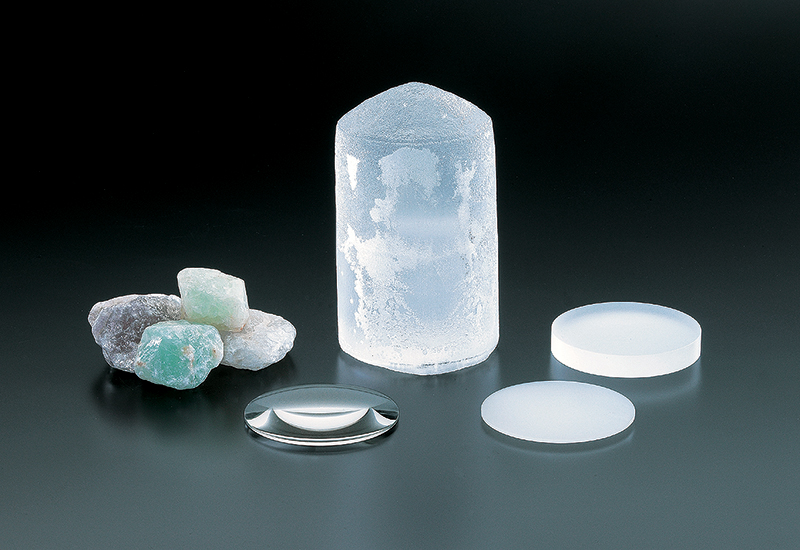 When heated to a high temperature, fluorite emits flashes of light. Calcium fluoride (CaF2) is a naturally occurring crystalline mineral. Made of synthetic calcium fluoride crystals, fluorite has outstanding optical characteristics, including an extremely low refractive index, low dispersion and excellent transmittance of infrared and ultraviolet light. But most of all, fluorite produces clear, detailed image delineation, unrivaled by conventional optical glass. Aiming to take advantage of these properties, Canon inaugurated its F Program to develop high-performance camera lenses incorporating fluorite. Fluorite had been a focus of attention in the past. In the 1800s, natural calcium fluoride crystals were already being used as objective lenses in microscopes.

Later, attempts were made to produce synthetic fluorite crystals for use as lenses in larger instruments such as telescopes. But the technical hurdles were high, and incorporation of fluorite in standard lenses was deemed impossible. These difficulties failed to quell the enthusiasm of Canon researchers as they took up the challenge with the vow of “developing fluorite as a viable optical material and producing high-performance fluorite lenses.” Differences in the convergence point of wavelengths of light appear as blurred colors, affecting the sharpness of the image transmitted through a lens. This problem is known as chromatic aberration. The ability to correct chromatic aberration is the key to high-performance lens specifications. To correct chromatic aberration, a low-dispersion convex lens and a high-dispersion concave lens are first combined to unify the direction of light waves and align the convergence points. However, examination of the area near the convergence point of the combined lenses reveals a residual aberration in the focal point for the green wavelength, which falls between red and blue.

This slight residual chromatic aberration is known as secondary chromatic aberration or secondary spectrum. Fluorite can play a significant role in eliminating this persistent secondary spectrum. Fluorite is characterized by extremely low dispersion, and unlike optical glass, its dispersion is anomalous. By creating a convex fluorite lens to eliminate chromatic aberrations, secondary spectrum becomes extremely small, and red, green, and blue focal points converge almost perfectly. The focal points converge at a single point, creating the image sharpness that puts Canon L-series lenses in a class of their own. In 1968, two years after the initiation of the F Program, Canon researchers grew a synthetic fluorite crystal. But numerous hurdles remained before fluorite could be incorporated into a camera lens. Because fluorite cannot be ground in the same manner as optical glass, Canon relied on its legacy of lens grinding technology to develop a specialized technique for working with fluorite.

This grinding process took four times longer than standard techniques, and afterward, each lens needed to be washed by hand. In 1969, we finally succeed in producing a lens using fluorite – the FL-F300mm f/5.6, Canon’s first camera lens to incorporate a fluorite element. Because longer focal length makes telephoto lenses more susceptible to the effects of secondary spectrum, fluorite made a significant contribution to the performance of this lens. Today, the Canon L-series of fluorite-based super telephoto lenses, characterized by refined delineation and exceptional high contrast, have earned a loyal following among photographers all over the world.